Hubby and I exchanged our valentine cards this morning, I had to laugh because he laughed at the outside and then opened it up and had this funny look on his face and he turned it around and showed me a blank inside, now this is the second time this has happened to me, I said well the front says it all :) 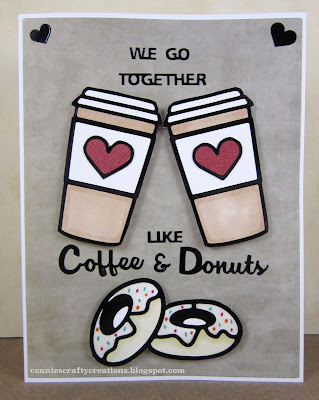 One of the girls in my stamp group sent me these stickers last year and I don't care for coffee but my hubby does so I thought he would like it.  I placed the coffee cups and donut stickers onto white  card stock, colored them with markers and hand cut them out, adding some glossy accents to the icing of the after adding a but of sprinkles to the icing.

Hubby made mine during a break at work, I guess the girls were making up little packets to give away and there were fake roses on top, they didn't need them all and hubby said can I have a few of those petals and leaves and they said sure, his glue was all dried up so he used a stapler to attach them to the card and then did some doodling to finish it off, isn't it cute how the petals look like a heart :) 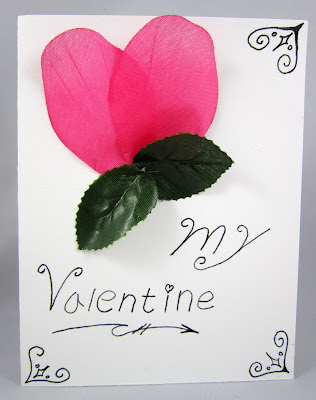 Update on my eye, I just got home from the doctors today, he looked all over then took out my contact and the pain was still there, he looked again to check the scratches and they were still there, he put some numbing stuff in my eye to lesson the pain and did some more digging, still couldn't find anything, he had me sit out in the waiting room for 15 minutes so that the numbing stuff would wear off again, when he called me back in he thought maybe it was like a calcium dot under the lid so he did more scrapping of the under part of my I lid even with the antibiotic drops that was still red, he put some more drops in my eyes that highlights scratches and as he was scraping and had my looking at the ceiling all of a sudden he saw a little something and pulled it out with twizzers, I saw it too and he went to get a tissue to put it on so we could look at it and he dropped it, so we are not sure what it was but the sharp pain is gone, now all I have is the pain from the scratches and I can totally deal with that while they heal, I am so glad he didn't give up and he gave it another try .  Thank you all for your prayers and best wishes, I should be on my way to total healing now :)

Connie
Posted by Conniecrafter at 3:56 PM

Both Valentines are thoughtfully done. I do like those stickers, I never have gotten any but they look fun to use.

Glad your eye is free of debris, finally!

Really cute!! I loved the first one!!
Hugs,
Deb

The coffee card is so sweet and so is the pretty one your hubby made you! I think that's so special!
Super happy that your eye is on the mend now!! Been thinking about you, and praying for you from time to time.

OMG your card for hubby is awesome ... blank inside happens and you're right ... the front says it all! LOL
I'm very impressed with Greg's crafting abilities! VERY creative on his part ... I'm in awe! LOL
OMG what a horrible episode at the eye doctors but thank goodness he saw it and got it out (what ever IT was). Praying for quick healing a NO PAIN days!! Hugs

oh connie, what a great update on your eye, i too am so happy the doctor did not give up and found what he did. i'm sure he knew there was still a problem since you were in so much pain. how wonderful that he did not give up!!!

i love the card you made for hubby, it is adorable and greg's too, it's so nice that he does this!!!

Great cards! Last year I forgot to write in my sister's Valentine card lol It happens :) Oh boy, glad he was able to find that thing in your eye, hope all is smooth sailing from here out! Good Luck!

I love how the petals look just like a heart, Connie! Isn't he the sweetest hubby ever? And the doodling is great, too. Mostly, it's the idea that he saw something of beauty and thought of you. THAT'S the truly gorgeous part of it all! Your card is above is so cute with the coffee and donuts! xx

Love the Valentine's Cards … and I'm so pleased that your eye is now on the mend … great news.

You each made the perfect card for each other! I mailed a card once and forgot to write inside. How bad is that? OMG, I'm so glad the doctor finally found the cause of your eye scratches! Wow! Let the healing begin!

Two fabulous Valentines cards, love those stickers!
You are brave to have all that done to your eye. Good news that something was found at last. Wishing you a speedy recovery.

Two beautiful Valentine's cards. How hilarious that one ended up blank on the inside. LOL.

Your husband was so very thoughtful and did a very nice job with his to you.