Who all watched the Royal Wedding yesterday?   We were stationed over in England when my husband was in the Air Force, in fact we were there when Diana was killed in that car accident, such a crushing blow for the country.  It was so nice to watch them all seem very happy once again.  I think my favorite part was Harry turning around and looking back while Kate was coming up the isle, I would love to know what he said to William at that point.  I did not get up early to watch it though, I taped all of BBC America's coverage of it and watched it through out the day as I was trying to get my cleaning and stuff done around here. 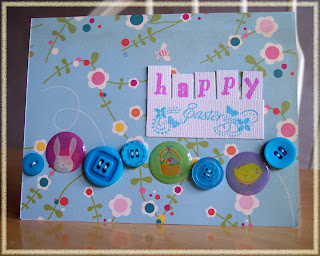 I tried a new layout after I wasn't as happy with the first card I made with the stickers.  This time I added forever in time buttons in with the Hallmark stickers.   Cosmo cricket paper. Studio G sentiment stamp, and the happy was done using Hero Arts Mixed Alphabet, I cute them in strips and tried to arrange them on different levels to mimic the border.

The sun is shining bright today so it's time to go take the dog for a walk,
Hope you enjoy a wonderful weekend,
Thanks for stopping by,
Connie
Posted by Conniecrafter at 9:13 AM

They had someone doing lip reading when he turned around. Will had asked Harry to let him know when she was close. He said here she comes now. When she got there Will told her, "You look beautiful".

I remember the night Diana died. I was babysitting my grandson. It was tragic.

Your card is lovely with the blues in your BG and the buttons too! Love the stickers and the sentiment too!.