I thought I would share with you the project my hubby did for me for our 30th Anniversary :)  It isn't a card, he made a 1/4 inch box with the scorpal and as you can see used all kinds of embellishments.  The image is clipart, and the sunset he did using one of his paint programs, he has a couple so I am not sure which one he said he used.  He used a Victorian image (that he hand cut out) because he knows I love movies in that era.  He said the bird is in there because he liked it didn't mean anything, LOL! 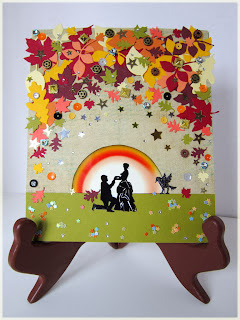 He spent quite a few hours before our anniversary punching out leaves of all sizes and colors, and just kept saying he had a project in mind, I never thought it was for me.  We also went hunting for small stars one time and now I know why.

Here is a little closer shot of all the embellishing. 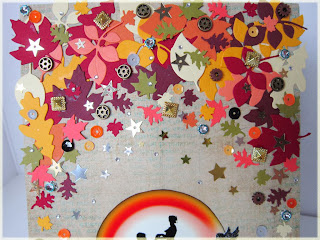 He used gems, sequins, gears, the stars are the confetti you can find at the party store and target.  He was going to try and use my branch die but he thought that you probably wouldn't be able to see it with all that leaves and stuff he added so he went without it.  Pretty cool huh!!  I told him I will put it out every fall.

We are at peak here in southern Illinois, the trees are just beautiful, although we are getting rain and is suppose to continue through tomorrow so we probably won't have many more left on the trees after all that.

Wishing you a good week ahead,
Thanks so much for stopping by,
Connie

Posted by Conniecrafter at 9:03 AM

That is incredibly sweet! What a lovely gift from your husband, a real act of love :)

Awe, that just melts the heart! So lovely! After 30 years I think you should keep him!

Connie! Your hubby made you a beautiful card!! 30 yrs went fast, didn't it!?
YES, it is so much harder to get that *older* weight off us, but I am determined NOT to gain this winter!

Oh Connie, what a darling husband! He did such a beautiful job :) So sweet!

So wonderful! What a blessed lady you are! :). The card looks great!

Your post today just warms the heart Connie! Such a wonderful box you DH has created. A keepsake for sure! It's amazing what they can do sometimes! All the best and congrats on 30 years! xx

Aw!! How sweet!! That is so thoughtful of him!! He did a great job!!
hugs,
Chris

What a sweet hubby you have! Now that is a treasure! He did an amazing job :)

Thank you so much for visiting my blog and for the lovely comment, after all that is the heart of blogging :)

I hope you have a wonderful day.
Blessings,
amy

This is seriously beautiful... the box and the sentiment behind it. What a sweet hubby you have. Guess after 30 years you figured out, "HE'S A KEEPER!"

Wow, how very wonderful. A true gift from the heart.

Is that love or what!~! He is so talented too! Who would guess. You are so lucky and what a gorgeous card!

that is awesome, he did a great job it is collage! I love collages. That is a keeper him and the card!!! hugs

Oh, Connie, this is just beautiful and the sweetest thing ever! Your husband is very artistic! 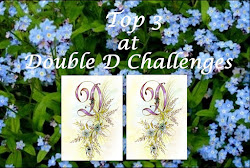