A fellow cardmaker friend sent me two of these playing cards with this cute little bunny scene on them in my Birthday card, I just had to give it a try and see what I could come up with for an Easter card.  Since it is a cute scene I decided to try and expand that scene a little bit, so I used my Tree die and cut it out with brown cardstock, after having it on there I decided I wanted the leaves to be green so I got out my sparkle pens in 3 different shades of green to color the leaves, although coloring them on the brown they all kind of look the same shade of green to me.  I cut the base with a coordinating die so it could be a shape card and using my homemade cloud stencil I sponged on ink for the background, adding a bit of brown for the base to go along with the playing card.  It still needed a bit of something so I used a sprig die and cut it apart to make bushes and had to add some flowers too :) 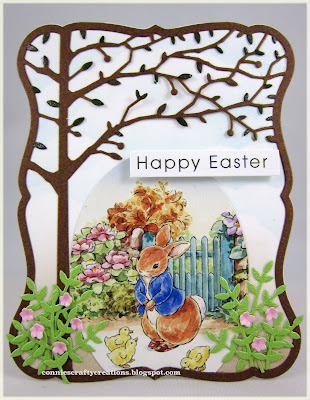 I never would have thought to use an image on a playing card for a card but this turned out pretty cute, you just never know where you can find inspiration for our crafting :)  Do you have unusual things you have used on a card or craft project?

Thanks so much for taking the time to stop by today,

Connie
Posted by Conniecrafter at 10:16 AM

Connie, that turned out adorable. Looks like Beatrix Potter images!
Can't think of anything off hand that I have used.

Oh, my gosh! I've used the front of playing cards before, but never the back. I've never had such CUTE playing cards! Connie, you did an amazing job turning this into a card. Oh, how I love it! All your special touches to build on the scene are fabulous! What fun!

Such an adorable card -- great use of those playing cards! Love the sweet little scene you've created!

What an adorable little peter rabbit! Super cute scene with all the die cuts! I don’t often use unusual things on my cards.

Such an adorable card, Connie, filled with happy Easter greetings! That bunny looks as if it has stepped out of a Peter Rabbit storybook. Isn't that tree die fabulous.

Peter Rabbit!!! This has such a beautiful vintage vibe to it. Love your tree and foliage accents, really brings it all to life!

Your little hopper is so cute in his egg shape domain, Connie! It's a wonderful creation! hugs, de

Connie, this is fabulous! What a darling image to begin with and your scene building makes it even more special. Love the tree and flowers and your sweet spring time scene!

Very, very cute. I love the shape and all the brown which makes things pop. Cute bunny scene.

This is just adorable - my grand-daughter would simply love it.

i LOVE this card...you did an awesome job on this one!!!

This is adorable! This is a great way to use the cute Peter rabbit card. I love how you added the bushes and flowers.

What a darling card Connie. That playing card is so sweet and looks great with the die-cut frame!