I finally got it done!!!!!  I purchased the paper mache boxes from Jo-Anns, they came in a set of 5 I used the 3 middle boxes. Added 3 coats of off white acrylic paint. The roses on the layers were made using Tim Holtz's Tattered Floral dies from Sizzix. The leaf punch is from Martha Stewart and I embossed veins into the leaves. The brown leaves were also a Martha Stewart punch. 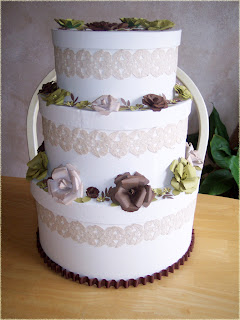 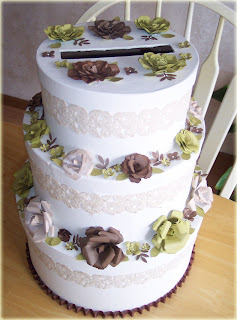 The roses on the very top were done using the McGill floral petals punch. The lace I found at a Flea market, was so thankful I had enough to go all around.  My husband said I needed something at the bottom to look like icing so we came up with this idea Using seam binding from Martha Stewart, I took double layer of score tape and put it all around, took a dowel for spacing and went around, so that the ribbon that is sticking out wouldn't stick to the scortape I took a paint brush with powder and put it on the scortape so the ribbon wouldn't stick to it. 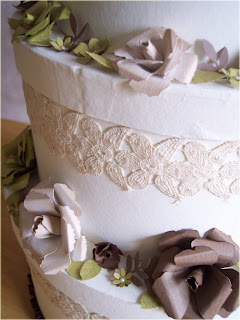 Here is a close up of the flowers. My Daughters colors are green and brown for her wedding.  I showed it to her this weekend and she seemed to really like it.

Thanks for Stopping by today, and I really appreciate the comments :)
Connie
Posted by Conniecrafter at 9:59 AM

Oh Connie it's fabulous!! What a wonderful project.. it turned out so beautifully.

Oh my goodness gracious, Connie!!! Girl, this is over the TOP GORGEOUS!!!! Let me just say, if your daughter does not like it you can send it it over to me :D:D. WOW, this is amazing!! Hugs, Sabrina

Oh, Connie, what a heirloom for your daughter to treasure for years to come! It's so beautiful! And what a fabulous idea . . . . very creative . . . I love it! The lace is so pretty, the ecru is perfect for the browns and greens!

What an awesome creation! Such great details Connie!

Wow, Connie! Wow! Wow! Wow! You did such a wonderful job on this. I love your roses. Everything looks so perfect! I know you worked on this for quite a while, but it sure paid off! Love it!

Connie, this is beautiful! My, oh, my! What an ambitious project, and it turned out just fabulous!

wow Gorgeous!!!Connie you are so creative!