Yes today is my Birthday and my Hubby gave me this card.  He said while I was at Craft night last night he was in my room making my card. 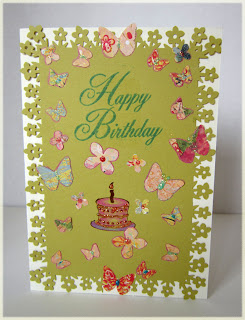 The sentiment stamp and the cake stamp were both right on top of the first drawer he opened so that is what he used, and he said he colored the cake with colored pencils.  He used some K& co. paper to punch out all the flowers (Martha Stewart) and butterflies. Added stickles to them too.  He said he didn't like how everything was blending in to the cardstock so he added pencil lines around all the punches.

We are having a beautiful day so far but it looks like it is clouding up, I really need to get outside and get some more weeding done that I started yesterday, don't want to do too much or I will end up throwing out my back again.

Hope your having a good day, Thanks so much for taking out the time to stop by,
Connie

Happy Birthday Connie!! What a sweet card for your to treasure! Your dh is a keeper since he "made" you a card! I hope you had a fabulous day and were treated like royalty!

What a sweet man you have! Happy birthday Connie. I hoe you have a wonderful day!
Hugs and smiles