We celebrated our 35th Anniversary last month and I forgot to share the cards we made for each other.  We also went out hiking for the day so I will share a bit of that also :)

First the card I made for hubby.  When going through my stuff to figure out what to do for him, I came upon this set and I loved the sentiment, so I just went along with it.  It took a bit of time since I had to hand cut everything out.  I just wrote the 35th in instead of trying to find my small number dies, that saved a bit of time. 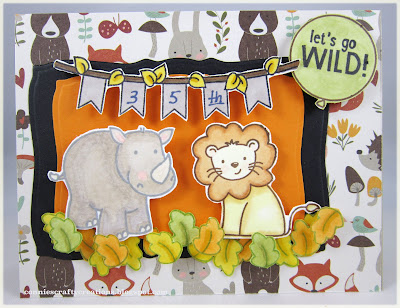 The stamp set is supposed to be a birthday set so I just stamped the sentiment inside the balloon stamp.  The leaves were perfect since we had already decided to go on a hike for our anniversary.

Doesn't the Rino look like it has been colored on vellum or something, that is just the color combo that came out when I combined the marker colors, I couldn't do that if I tried any other time, LOL! I told him I hoped he didn't feel like this was too childish looking. 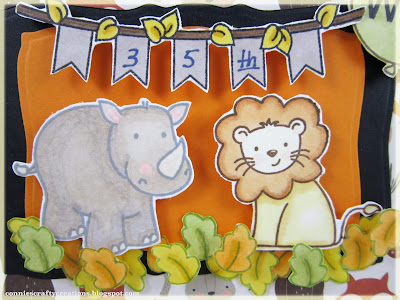 The card my hubby made me was all done in pencil, I like how he has our initials on the tree trunk :) 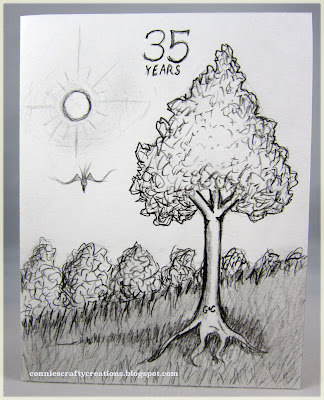 Since we had recently went to Michigan we didn't want to go far so we headed down south to Garden of the Gods in the Shawnee National Forest. We had been here once before shortly after we moved to Illinois so it had been a few years and we had forgotten how beautiful this area is, of course the changing of the leaves makes it that much more beautiful!

I am going to share the first trail we went on, this was the more rugged trail but we knew we wanted to go on the easier one closer to sunset.  It was a beautiful day, we couldn't have asked for better, beautiful blue skies and the temps were perfect! 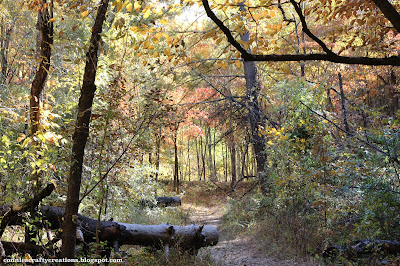 I took so many pictures of the trees with the blue sky, it had been awhile since we had such blue sky, and the leaf colors along with it was just so pretty! 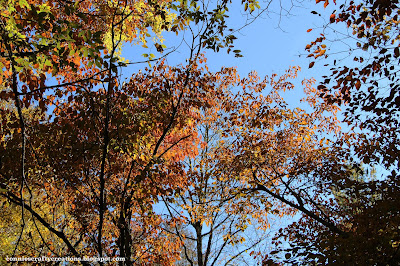 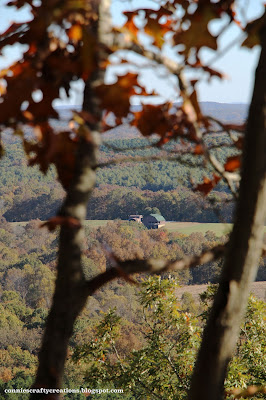 You don't know how long it took for me to get this picture of the house way down there, such a beautiful place to live, my camera kept wanting to focus on the trees, I finally got it to focus on the house! 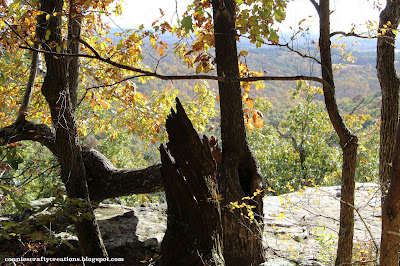 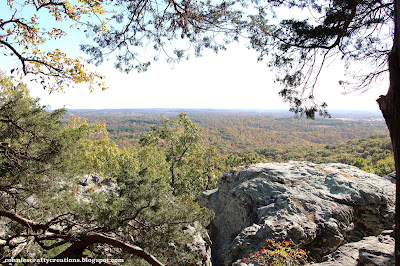 When we reached the top you wouldn't believe the amount of lady bugs or Asian beetles there were flying around, my hubby took pictures of the ones landing on me, we thought they were lady bugs when we were up there but after seeing the picture of the ones that landed on me hubby looked it up and he thinks they were asian beetles instead. 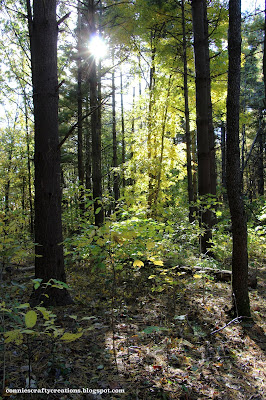 As you can see there were still spots that were quite green yet, we were not in total peek yet on this trip. 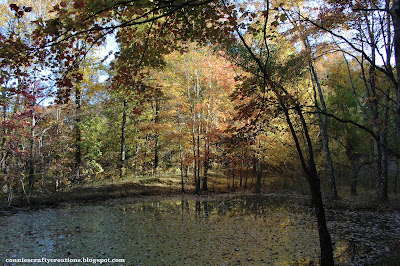 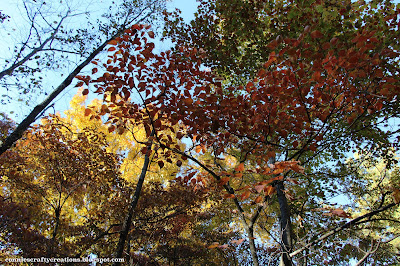 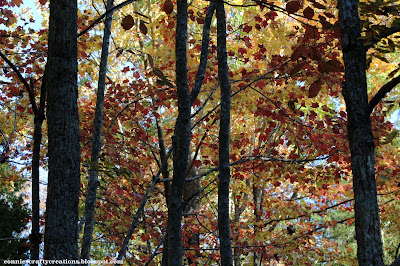 I haven't even looked at the pictures of the second trail we went on yet, but I will share some from that trail at a later date.

Hope you have a wonderful week, Thanks so much for stopping by,

Connie
Posted by Conniecrafter at 10:08 AM

Oh, Connie, I love your whimsical critter anniversary card! I think playfulness keeps a marriage healthy, but maybe that's just me. It's sweet how your hubby always makes you an anniversary card. He's a good artist, and the initials on the tree are the most thoughtful, perfect thing. Gorgeous photos, and you know how much I enjoy seeing them. The trail through the woods, sigh, and those views and colors! I'd like to travel away from our evergreen forests and high deserts to an area like yours next spring, but we'll have to see what comes. Beautiful, and thank you for taking the time to share!

What fun to exchange handmade anniversary cards! Yours is adorable with the sweet rhino and lion. Love the banner and the leaves. Your husband's card is so wonderful and I love the initials, too! Enjoyed your pretty leaf photos!

Happy Anniversary to the both of you, Connie. Both are fabulous cards. Yours to your husband is fun and your husband's to you is such a gorgeous sketch. How sweet are the initials on the tree. Why I believe there is many a tree with initials of lovers scratched on them. =) What an awesome place in which to hike to celebrate such a momentous occasion. Oh my goodness the trees in Garden of the Gods in the Shawnee National Forest, are beautiful. It must have been a very special day.

first off, happy anniversary!!! i think it is so cute that you both make cards for each other. i remember that from last year!!!

your images are beautiful, you are becoming quite the photographer. what a wonderful way to celebrate your anniversary!!

Hi Connie,
Oh my goodness - 2 wonderful cards!! Thanks for sharing. Your card for him is adorable and very sweet; great depth of layers~ And he is a talented man, isn't he!? Beautiful work, love all the meaningful details~
Your photo's are always a treat. What a gorgeous spot to spend time together! (just wanted to say there is a Garden of the Gods Park in Colo. Spgs., CO as well. Lots of red rocks! )
Hope you have a blessed day~ karen o

Oh, Connie, how touching for you and your hubby to exchange handmade anniversary cards! I love the darling animals on your card with the 35th banner and "let's go WILD" sentiment. Both animals are colored beautiful, and yes, the hippo does look like coloring on vellum. Your husband's card reflects the skills are a great sketcher. I love the tree, especially the initials at the bottom. What a sweet thing for him to include. Both cards are outstanding, Connie. Now the scenery photos are awesome! I love the one with the house in the distance. The fall colors are so beautiful. I miss being up south with four seasons as Florida has one season all year long. LOL. Hugs, sweet lady!

Oh, sweet Connie! Congratulations on your 35th wedding anniversary! What a blessing! And what a sweet card you've made Greg with the playful animals. I'm with Leslie that playfulness in a marriage is a wonderful gift. It's important to have fun with each other, and it's clear that you both enjoy spending time together. Love his hand-drawn card, right down to "carving" your initials in the tree! What artists you are, and I absolutely LOVE your photographs. You are both so talented in so many ways, and I love seeing the turning leaves especially with the sky showing. And bravo for getting the focus on the house in the distant. Beautifully done and such a display of God's beauty in this world. Sending hugs and love...and wishes for many more years! xoxo

Fantastic! Congratulations on 35 years!!! Love your card, the critters are oh so cute! Your hubby's card is magnificent! I love the initials carved in the tree, so romantic!!!

I just love the you and your husband exchange handmade cards...it's such a sweet sentiment to one another. Both cards are darling and I love your "Let's go wild." :) What a blessing to be married for 35 years!

Love and hugs to you!

LOVE your cards to each other ... how sweet ... and after 35 years! WOW! Good for you guys!! Your husband is quite artistic ... and not just in photography! GREAT JOB!! Thanks for sharing the photos ... once again I've enjoyed 'walking through these beautiful trails' with you from my comfy chair! LOL

Two fabulous cards to celebrate a wonderful milestone! Love the animals on yours and your hubby’s drawing is excellent. Love the intitials in the tree...such a lovely touch.

Your photos are stunning as always, beautiful colours.

Congrats on 35 years Connie and what a romantic and very artistic card from Hubby, love shines. big hugs.xx

Connie, I hope this comment sticks. Happy 35th Anniversary! Your cards are so sweet. Your husband sounds like a romantic!

Congratulations on such a milestone
So happy for you. Your cards are both so lovely. I do like how your I initials ended up in the tree. Love the pretty hiking photos

Happy Anniversary to the both of you …