One of my stamping friends sent me some feathers last year and I used them all except for the big one you see here, I decided to use it this year but had to add some of my own.I cut the little one on the left from a scrap of mega flakes paper I had left over and the one on the right I added a few different inks to it to kind of dirty it up.  I tied them with some twine and added a washi tape sentiment and gold border dazzles.  Finishing off with some crystal glaze. 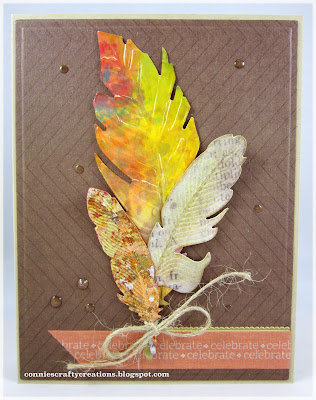 Sharing some more pictures today, these were on the Western side of the Upper Peninsula of Michigan. 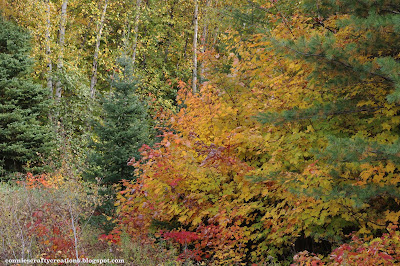 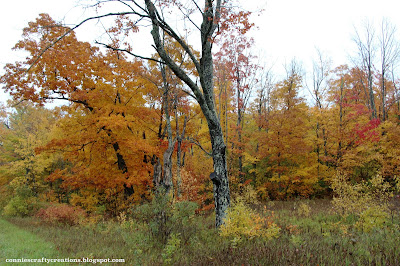 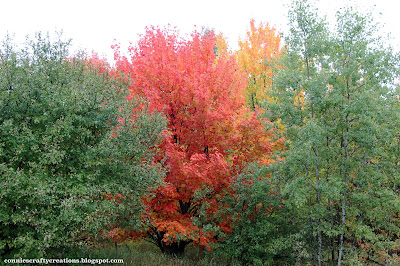 Some of the leaves were so bright that even though it was a misty day they still shined through. 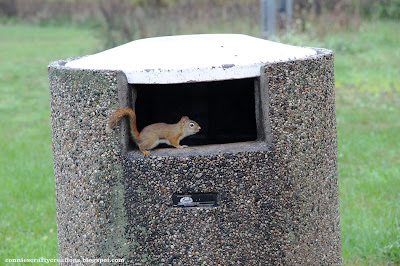 My hubby was able to get a few better shots then I did, mine were pretty blurry. 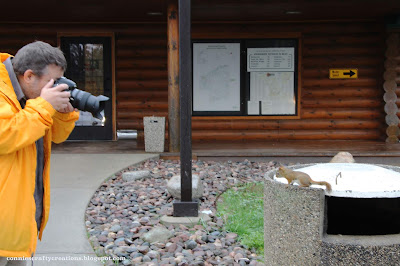 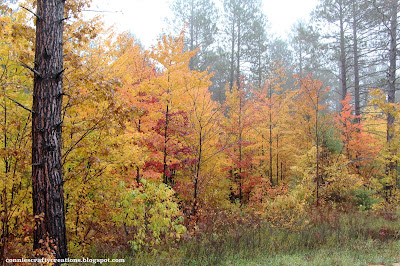 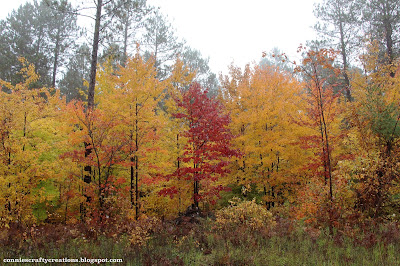 We were driving along and saw that a few cars were parked along side of the road and so we stopped to and found out that it was because of the pretty waterfall. 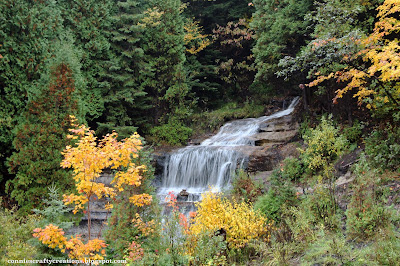 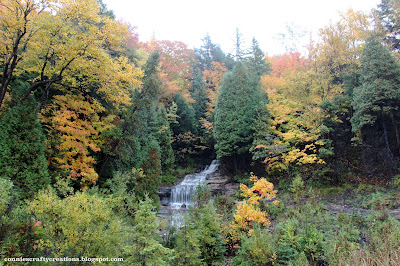 I have one more set of pictures to share next time, when we headed down into Wisconsin.
Thanks so much for taking the time to stop by today!

Connie
Posted by Conniecrafter at 7:31 PM

Your pictures are so gorgeous with the trees all in colour. Love the waterfalls.

Your feather card is just so cute. I love the colours on the large feather. You grouped them quite nicely.

Love your feathers card, perfect for all different occasions. A great combo of different feathers too.
Your autumnal photos are just stunning, amazing colours.

Most beautiful feather ever, nicely arranged into a gorgeous fall card! Ohhhh, and your photos! You know I love seeing them. It's like a travel log and I've got the bug. Enjoying staying home for the time being, but will soon enough be on the road again. That waterfall is so beautiful!

So appreciate that you share your excursions and adventures, Connie - especially since I'm unable to do those things! I feel like you and I are having a cuppa, chatting and looking at your photos. It's a pleasure seeing things through your eyes, and enjoying the beauty that is important to you. Your feather arrangement is beyond words! I love the autumn colors, but more, I like the colors on the white words (do you know what I mean?) each feather is unique, and so pretty! Lovely card. Wishing you a wonderful week-end! hugs, de

Ooooooh I love your feathers - such a fun combo of colors! Beautiful card and beautiful nature pics as well!

I love this! So pretty. Thanks for sharing your Fall pictures too.

You have coloured the leaf into beautiful autumnal hues, Connie. I love the three leaves tied with a bow into a pretty arrangement. More lovely photos of your autumnal trees. That's a serious camera you have there.

Your husband is so close to that little squirrel! ♥

Love your sweet card. The colors are so nice and the little crystals look like dew drops!

Ooooh such pretty fall feathers! Love the colors and the grouping of them. Makes for a fantastic card!

That's a lovely card Connie, and beautiful pictures.
I love Fall (Autumn) and the colours the season brings.